Until last century, the only adhesives available were derived from natural sources such as bones and plant saps. With the development of synthetic polymers, however, an enormous diversity of new adhesives became available. Today, adhesives range from the gum on postage stamps to the epoxy resins used in aircraft and bridge building.

Science and industry have developed many types of adhesives for various uses, but the basic mechanism of adhesion is still not well understood. At one time it was thought to involve a mechanical attachment: liquid adhesive flowed into pores or cavities in the adherends (the materials being stuck), hardened into a solid and thus locked them together.

This is now thought to contribute something to the strength of the bond, but not considered to be its main cause.

The current belief is that adhesion is caused by chemical and physical forces of the same kind as those that hold the atoms and molecules of the adherends themselves together. But exactly how these forces are called into play still is not known.

The adhesive must normally be applied to both surfaces that are to be joined together, because no matter how smooth they seem they will be full of irregularities at a molecular level which must be evened out if the process is to be successful. 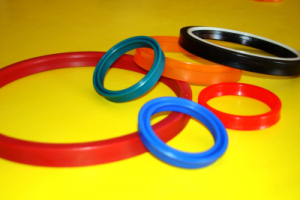 With most types of adhesive, the strength of the bond between adhesive and adherend is stronger than the cohesion of the adhesive itself. For this reason, it is important to keep the adhesive film as thin as possible to prevent the joint from failing.

The joining surfaces of the adherends must therefore fit together exactly. They must also have a large enough area, and the right shape, so as not to overstress the joint. Adhesive joints resist shear (sideways forces) and tension as well, but do not stand up to peeling forces, where there is tension at one edge of the joint that can cause a split to form and spread.

More and more joints in manufactured goods of all types are being made with adhesives instead of more traditional methods such as bolting or welding. This even includes metal to metal joints: recent examples include aluminum chair leg assemblies and certain parts of aircraft, where honeycomb structures of light alloy are bonded between two aluminum panels.

In joints of this type, the adhesive cannot normally be used as direct replacement for the earlier fastening method, and the joint has to be redesigned from scratch. Sometimes the adhesive is used as a supplement to a mechanical fastening: parts are spot-welded together and the space between the welds filled with adhesive to steady the parts against vibration.

It is important to choose the right adhesive for a job. For example, joints between flexible materials must be made with a flexible adhesive. In industry, other factors are also important, for example, setting time. It is no use cutting manufacturing costs by using adhesive joints instead of more expensive fastenings if the whole industrial process is held up while everyone waits for the adhesive to set.